In Bonab County in East Azerbaijan, mosques, houses, dovecotes, and numerous historic places exist that some of them are as following:
Seyf-al-Olama Mansion originally belongs to Sheikh Ali Ghazi Bonabi known as Seyf-al-Olama, and this nickname was given by Naseroddin Shah and after victory of Sheikh Ali Ghazi and People of Bonab against attacks by Kurds. Its construction date is beginning of Qajar era.
This building has been recorded in list of national works with registry number 3929, and in 1379 (2000) it was purchased by cultural heritage as department number 2 of cultural heritage organization and then it has been repaired.

General Specifications
Name
Saif al-Ulama Mansion
Appellation
This title was given by Naser al-Din Shah after the victory of Sheikh Ali Qazi and the people of Bonab against the assault of the kurds to him.
Age
Qajar era
Builder
Sheikh Ali Qazi
Architectural style
Qajar
Special features
Of the striking features of the architecture of this building, its symmetrical surface can be mentioned.
Suggestions
Best time to visit
Spring until early Fall
Duration of visit
15 to 30 minutes
Access route
Address
Darya street, Gazavasht neighborhood, Bonab, East Azerbaijan, Iran
Facilities
Access to vehicles 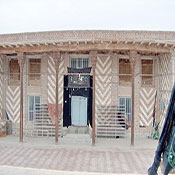