After traveling 52 kilometers from south of the capital and passing Nir County, a village is observable on the map that is known as blind (Kour) Abbasloo. A village that was slept in arm of one of the most secretive ancient castles. Its stone architecture is unique in the world and has made Boini Yoqun Castle to a recognized opus in archeology.
Despite the distinguished works from four thousand years ago in this area, the major progress of this castle has been in Parthia era and at the same time of Iran and Rome Battle. In this historic period, this area faced with population increase and it has had more residency use than military use.
The castle has more than 3000 meter extension and it is multi-layer which shows the continuity of human’s residence from Parthia era to Safavid age.
The initial explorations in Boini Yoquni castle has caused that this area to be introduced as the open museum site in country. A museum which tells the story of people from previous millenniums and travelers can use this historic work and the nice nature of the area. 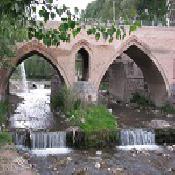 No record found in this area.
Mk
2021-05-08 15:18
Karma 0
This place has scary myths about people who simply vanished after visiting the castle so its called castle that eats people
User Comments